Why aren't you cutting the grass properly?

We understand that as members of the public, you probably have a lot of burning questions regarding the roads around Buckinghamshire. Well, we're giving you the opportunity to get your questions answered by Transport for Buckinghamshire's Contract Director!
This is the 11th blog post that we have produced focusing on the questions that you have been asking the most, this week we are looking at:

Why aren't you cutting the grass properly?

Grass cutting takes place between April and October depending on the weather and each cut takes between seven and eight weeks to complete.

Every year, we carry out four urban grass cuts across the county. In some urban areas, responsibility has been passed to the local Town or Parish Council through devolved services.

A lot of you have expressed some dissatisfaction with a number of aspects of our grass cutting this year, so we would like to address those concerns now:

The grass cutting is behind schedule!

We did start our grass cutting in the Aylesbury Vale one week late due to equipment issues. Since then, we have lost approximately five days due to poor weather conditions and issues with equipment. As it currently stands, we have completed the first cut and already begun the second cut.

As we are approximately two weeks behind in the North of the county, we are working at the weekends in an attempt to catch up. By the time we get to the third cut, we will be back on track with the programme.

In the High Wycombe area, the grass cutting programme is also approximately two weeks behind.

In South Bucks and Chiltern areas of the county, we are approximately four weeks behind and are just completing cut one.

You're not strimming after cutting the grass and then you're leaving the cut grass behind!

All strimming around street furniture is completed in conjunction with mowing. However, as the grass has not been cut since last October it can be incredibly long and doesn't always drop once strimmed, giving the impression that it hasn't been cut.

We have not collected the clippings for many years as to do so adds a large cost to the operation. There are also issues with appropriate disposal of them. Our teams do blow the loose grass cuttings back onto the verge. However, this does mean the loose grass can sometimes make the area look like it hasn't been cut or strimmed. Unfortunately, if the conditions are windy then the grass can blow back onto the footpath or road. 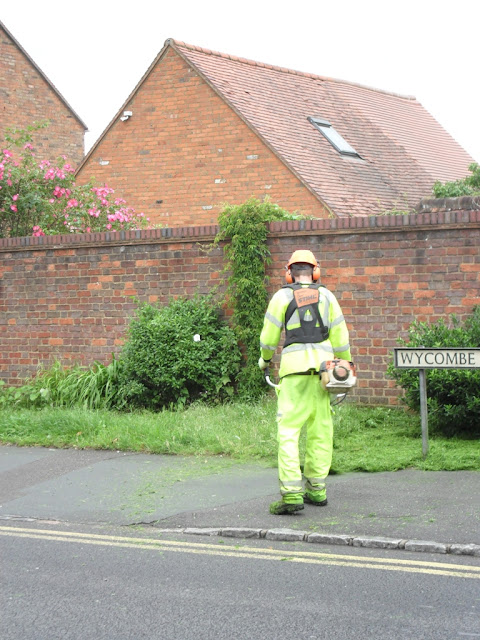 Because of the amount of rain we have had at the moment, the grass has had ideal growing conditions and as a consequence of this, is growing very quickly. This means that sites that have received their first cut early on in the programme may appear as though they have been missed from the programme.


Can I cut the verge outside my house?

In much the same way as we encourage residents to clear the footpaths in the winter if we have snow, there are very few good reasons to prevent a resident living in an urban area with a 30mph speed limit from cutting the verge outside of their property. If you want to cut the grass then:

- Use a petrol mower if possible, if not then make sure your electric mower has a protected plug or is connected to a protected socket

- Make sure there are no big stones that could flick up and break windows, damage cars or hurt yourself or a passing pedestrian

- Stop mowing when somebody comes close

- If you want to collect the clippings then dispose of them responsibly. Leave the last cuts clippings in place, this will help to replenish the soils nutrients.

The people driving the vehicles are speeding

Our teams are trained to use the equipment that we use and are aware that speeding does cause issues with the quality of the cut produced.

All of our vehicles are tracked and the speed is monitored.

Iver is receiving grass cuts just as often as anywhere else in the county. In fact, Iver was one of the first parishes to be cut in the South of the county!